Children are very sensitive when they get infection and bacteria grow in the child's urinary organs (body parts that carry urine) it affects child's bladder, kidneys and ureters. 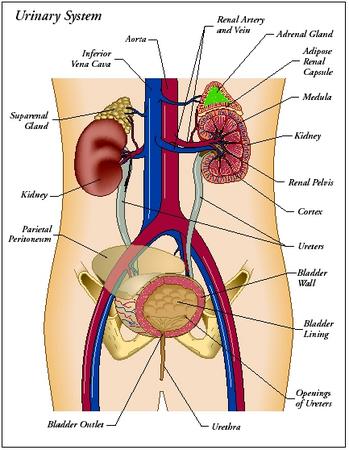 worried. The child is ill but for no obvious reason. There may be temperature, vomiting / diarrhea, child’s appetite may be lost; it may not feel like eating. Urine may get cloudy or bad smelling, child either has difficulty urinating or needs to urinate frequently. Children may also complain of pain in their abdomen or pain when they urinate.

Give the baby following medicines

1drop in a cup of water four times a day.

1drop in a spoon of water on alternate days.

Urine scanty or suppressed, with general oedema and drowsiness, lack of thirst and suffocation on lying down. Albuminous urine with tube casts.

Asparagus Cystitis, enlarged prostate and catarrh of the neck of the bladder.In Involuntary urination during sleep in children Belladonna is frequently indicated.

Benzoicum acidum.Irritable bladder, with dribbling of strong-smelling urine it is high colored and of a very offensive ammoniacal odor, like that of the horse.

Cantharis  Persistent and violent urging to urinate, with great tenesmus ; the urine is passed only in drops, and seems like molten lead passing through the urethra ; intense burning on urination, and aching in the small of the back.

Causticum  Paralysis of the bladder ; involuntary urination while coughing ; nocturnal enuresis of children during the first sleep.

Squilla and Natrum muriaticum have involuntary spurting of urine during coughing.

Chimaphila Catarrh of the bladder, with offensive, turbid urine and great difficulty in commencing to urinate.

Digitalis Strangury and frequent urging to urinate ; urging at night from enlarged prostate ; relief from lying down ; thick, yellow discharge from the urethra ; useful in gonorrhea.

Eupatorium purpureum Dysuria, frequent painful urging with either excessive or scanty flow of urine, which is high colored and contains mucus ; there is also aching in the region of the kidneys.

Ferrum phosphoricum Incontinence of urine from weakness of the sphincter, constant dribbling of urine during the daytime.

Kalium phosphoricum Where it is due to a paralytic or paretic condition of the bladder or from nervous debility ; there is inability to retain the urine.

Lycopodium The urine is turbid and bad smelling and deposits a red sand ; child cries before passing water on account of lithic acid in the urine, the diaper is stained yellow.

Nitricum acidum  The urine smells as strong as a horse's urine ; burning, tenesmus, and a sensation as if sticks were in the urethra when urinating.

Pareira brava Constant urging to urinate, with pain in the glans penis and down thighs ; patient sometimes has to get down on all fours to urinate, the straining is so severe ; urine passes in drops and contains much thick and viscid mucus.

Petroselinum A sudden desire to urinate, which if not attended to at once causes severe pain ; children dance up and down and cry when this desire seizes them.

Phosphorus It produces a marked nephritis, with profuse discharge of bloody urine which contains casts.

Sepia Irritable bladder, involuntary escape of urine during first sleep.Red sediment in the urine which is acid and fetid.

Terebinthina Dull, aching pains in the rend region ; drawing pains and distressing strangury ; urine scanty, bloody, dark and smoky looking and smelling like violets ; there may be also excessive tympanites.

Uva ursi Burning, scalding urination ; urine stops suddenly, as if a stone had rolled in front of the internal orifice of the urethra.Urine is ropy and bloody.

Opium.Retention of urine from fright and after parturition.

Hyoscyamus, Causticum and Arsenicum have retention of urine after labor.

There is atony of the muscular coats of the bladder.The urine is voided very slowly by drops instead of a stream, and it takes a long time to empty the bladder.Nocturnal enuresis.

Pulsatilla in cystitis - Frequent urging to urinate, as if the bladder were too full ; urine turbid.A useful remedy for cystic symptoms during pregnancy.

Kreosote The patient urinates while dreaming of the act.


This page contains basic information. If you are concerned about your health, you should consult a doctor.

Arthritis Take ‘ THUJA OCCIDENTALIS-30’1drop in ½ cup water once every week; “GUAIACUM-Q” 1drop in ½…

Antioxidants The components of food with antioxidant activities are vitamins A, C,…

Homoeopathy safer and superior medicine. If the proof of the pudding is in eating, it is impossible…

What's in the name?HomœopathyNow values tradition, this underpins the college ethos. If we look at key…