Apparent  amenorrhoea or cryptomenorrhoea is that form in which there are symptoms of menstruation such as a feeling of fullness in the breasts and abdominal pain every month, but the menstrual flow is retained behind an imperforate hymen, an occluded os or vagina.
In secondary amenorrhoea, the flow after having been once established, ceases for a time.
The Menopause or climacteric is the epoch at which the reproductive activity of the female undergoes involution and the menses, which are the sign of that activity, cease.

This may take place in three ways

(ii)they may cease quite suddenly;

(iii) there may be a series of haemorrhages.

When menstruation ceases at the normal age of the menopause, the patient should be reassured that the occurrence is physiological and reminded that in a healthy woman this process takes place with no disturbance of her normal life.Sexual intercourse can of course continue normally.

Attendant phenomena of the menopause may be as follows

(b)         ‘Hot flushes,’a generalized vaso-motor disturbance, felt as a wave of heat spreading up over the face and head and sometimes accompanied by sweating.

(c)         Nervous phenomena may appear at this time –insomnia, irritability, restlessness and depression.

(d)         At and after the menopause, atrophic changes occur throughout the genital organs; the uterus shrinks and its muscle wall becomes thin. The vaginal folds become smooth and there may be some contraction of the introitus, leading to dyspareunia. The extent of this change may be estimated by microscopical examination of vaginal smears.

(e)         Fibroids and other pelvic lesions such as endometriosis tend to involve at this time, but must be carefully watched.

Premenopause marks the beginning when your body transitions into menopause; your periods may become irregular since your body is gradually changing the levels of estrogen and progestron it produces.Once you have gone twelve months without having a period, you have reached menopause; your ovaries are producing little estrogen and no progestron and are not releasing eggs.The time that follows menopause is called postmenopause. Many of the symptoms associated with menopause will dwindle and/or occur less frequently. Menorrhagia and in particular irregular uterine bleeding require most careful investigation at this age when cancer is especially liable to develop. 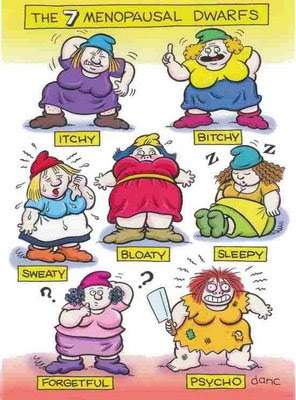 Sepia : The menses are usually late and scanty, though they may be almost any combination ; there are bearing down pains in abdomen ; must cross limbs to prevent protrusion ; there is extreme weakness, a dragging, weak feeling in the back ; the womb often feels as if clutched and suddenly released ; gone feeling in abdomen ; there are symptoms of uterine stasis.Sepia comes in most usually after other drugs. Hering called it "a finishing remedy."

Lilium and Sepia : It has bearing down, everything seems to protrude, and is relieved by pressing the hand against the vulva.The ovarian and uterine pains are more intense than in Sepia ; the nervousness is more marked and exercise relieves ; uterus is sore and sensitive ; patient is better when busy. Lilium is worse in the afternoon, Sepia in the forenoon.

Helonias: Helonias produces a soreness in the womb, a consciousness of a womb. Tired, aching feeling with burning in back and legs ; there is also profound melancholy ; soreness and weight in womb.

Sulphur resemble Sepia : There is the bearing down and the weak feeling or " goneness " in the abdomen and flushes of heat. They are complementary.

Sepia and Murex The principal difference lies in the fact that Murex causes sexual excitement and copious secretions, otherwise the drugs are very similar. Murex has a feeling as if something was pressing on a sore spot in the pelvis. Secretions, such as menses and urination, are profuse.

Sepia and Kreosote: Both have intermittent menses. Both have dragging down pains in back. Both have pressure outward on genitals. Both have painful coitus. Both have red sediment in urine. Both have turbid and offensive urine. Kreosote has copious menses, Sepia scanty. Kreosote has dragging in back relieved by motion, Sepia is worse from motion. The Kreosote leucorrhoea is acrid and irritating, excoriating the parts, this Sepia does not have.

Stannum : It has prolapsus with bearing down and melancholy, but it has characteristically falling of the womb during hard stools. The patient is so weak that she cannot talk, and has to sit down several times while dressing in the morning.

Nux vomica: Nux has a predominance of gastric symptoms ; there is no " goneness " as in Sepia ; there is less bearing down and dragging.

Aloe : The relaxation of tissues is more pronounced under Aloe ; the heaviness, weight and dragging down are more intense ; bowel symptoms will decide ; there is loss of control of rectum and looseness of bowels.

Podophyllum : There is diarrhoea, and prolapsus and burning in pelvic regions ; there is bearing down as if the genitals would protrude during stool. It differs from Sepia in its gastric symptoms.

Pulsatilla : There is chilliness ; there is heaviness and weight in pelvic regions. The menses are delayed and scanty ; the flow is fitful and changeable ; worse in warm room and better in open air ; amenorrhoea after wet feet.

Aurum : Aurum congests the uterus and it becomes prolapsed from weight ; there is a bruised pain in uterine region.

Platina : There is profuse and clotted menstrual flow occurring too early ; voluptuous irritation of genitals and nymphomania ; there is prolapsus and induration of uterus ; ovaries are sensitive and have burning pains in them.

Caladium cures nymphomania from worms crawling into vagina and there causing irritation .

Crocus dark, clotted menses and is recognized by the symptom of a sensation as if something alive were moving about in the abdomen.

Carbo animalis  besides Sepia has induration of the cervix and is distinguished from Sepia by throbbing headache which follows menses.

Natrum hypochlorosum and Ferrum iodatum have the symptom that the womb seems as if pushed up when the patient sits.

Actea racemosa : It is especially a remedy for threatened miscarriage when the pains shoot across the abdomen from side to side. Suppressed, tardy or irregular menstruation when accompanied by reflex disturbances.

Caulophyllum It produces a spasm of the uterus and is useful in dysmenorrhoea ; there is a sensation as if the uterus were congested, with fullness and tension in the hypogastric region. Menstruation too profuse and too frequent ; the flow is passive.

Senecio: The menses are scanty ; there is apt to be associated with it bladder pains and dysuria ; suppression of flow causes cough with bloody expectoration ; sleeplessness reflex from uterine irritation.

Aletris: With all uterine troubles and leucorrhoea there is extreme constipation, great effort being required for an evacuation ; patient is weak and tired.

Ammonium muriaticum, Apis, and Arnica have a sensation in the groin as if sprained.

Cantharis : Nymphomania, with the bladder symptoms ; menses too black, too early, and too profuse ; it favors the expulsion of moles, hydatids, etc.

Lachesis : Menses scanty and feeble, black and offensive, with pain in the hips and bearing down in the left ovary ; better when flow is established.

Palladium: Soreness in abdomen with downward pressure ; tired feeling in back ; knife-like cutting pains in uterus ; swelling and pains in ovarian region ; bearing down relieved by rubbing.

Alumina: Chlorosis with pale and scanty menses and craving for indigestible substances.

Sepia  has relief from lying down and is worse from standing, being the reverse of Belladonna.

Kreosote has bearing down worse from rest and relieved by motion.

Michella : Engorged cervix with irritation at the neck of the bladder.

Gelsemium : When the uterus feels as if squeezed by a hand ; scanty flow ; aphonia and sore throat during menses.

Graphites: The womb feels as if it would press out of the vagina ; enlargement of left ovary with scanty delayed menses ; ante flexions and ante versions ; dysmenorrhœa of fat women with herpetic eruptions, patients constantly cold.

Natrum muriaticum : There are scanty menses, painful coitus and red sediment in urine. Menses may be scanty for a day or two then copious ; the sadness of the drug is increased before the menses. When the patient gets up in the morning she must sit down to prevent prolapsus. Backache and morning aggravation are characteristics.

Secale : Persistent hemorrhages of dark, thin blood. It is a passive flow and it may be offensive. There may be coldness, formication and tingling.

Bovista has bright, thin hemorrhage ; it is very periodic. The flow chiefly occurs at night or in the morning.

Ustilago: The flow is bright red, partly clotted. Slight manipulations, such as examinations, cause hemorrhage. Menorrhagia from retro flexions.

Causticum  has menses flowing only in daytime when about on feet .

Trillium :  Bright red, profuse hemorrhages, with faintness in abdomen. It is an active acute hemorrhage, with pains in sacroiliac synchondroses.

Millefolium:  It is a remedy for thin, bright red flow.

Ipecac has the same symptoms as Sabina, it is distinguished by the persistent nausea.

Kalium carbonicum: Menses are too early and too profuse, and last too long ; there may be itching of the body during menstruation and a great deal of backache. Amenorrhoea, with backache.

Calcarea fluorica :In excessive menstruation with bearing down pains, flooding ; displacements of the uterus ; prolapsus ; dragging pains in the region of the uterus and in the thighs.

Belladonna : Menses too early and too profuse, with downward pressure as if everything would protrude, bright red in color, or of decomposed, dark red blood, which feels hot to parts.

Calcarea carbonica : Too early, profuse, and last too long in characteristic Calcarea patients ; the feet feel cold and damp.

Nux vomica : Too early and profuse ; nausea in the morning during menses, with chilliness and pressure towards the genitals.

Conium is one of the principal remedies for early and scanty menses, accompanied by painful cramps in abdomen, preceded by soreness or nodular swellings of the breast.

Silicea : Menses early and scanty ; the discharge has an acrid smell ; cold feet during menses ; burning soreness and itching of the pudenda.

If the proof of the pudding is in eating, it is impossible to deny that like cures like.

This page contains basic information. If you are concerned about your health, you should consult a doctor.
A good guideline to remember is:
Homoeopathy as the general rule; allopathy as a last resort.

Arthritis Take ‘ THUJA OCCIDENTALIS-30’1drop in ½ cup water once every week; “GUAIACUM-Q” 1drop in ½…

Antioxidants The components of food with antioxidant activities are vitamins A, C,…

Homoeopathy safer and superior medicine. If the proof of the pudding is in eating, it is impossible…

What's in the name?HomœopathyNow values tradition, this underpins the college ethos. If we look at key…